Yesterday evening I was at a meeting. More of a presentation, actually, by an Italian lawyer, who was supposed to be updating us on recent changes to the law, but insisted on filling us in on the legal background, basically starting with the Romans, then Napoleon, then independence, then WWI, then fascism, and so on.

It was a two-hour meeting, in theory, and by the end of the first hour we were still only up to 1975, and NOTHING RELEVANT HAD BEEN SAID.

I was rolling my eyes, of course, and even the Italians had begun to fidget and look at their phones.

With half an hour to go, we briefly heard about the new developments, which are supposed to be an improvement but are predicted to lead to years of chaos and delays.

After which the floor was opened to questions. That was basically, our chance to moan, politely of course, and with the greatest respect for all the experts and professionals involved.

We were sure they were all doing their best, were well-meaing, hard working, and doubtless competent in their fields.

But, erm, well why couldn’t they get their shit together for once (it wasn’t phrased exactly like that)? Why does nothing in Italy ever seem to change for the better?

The man sitting next to me touched me on the arm and whispered in my ear that he supposed it must be all very confusing for me, being a foreigner, all those legal terms, and so on. So I whispered back that no, actually, after a quarter of a century, I was totally used to presentations of this type, in which the message, if their actually was one, was obscured by overlong preambles and general irrelevancy.

Of course I didn’t understand all the legal references and their full implications, but virtually none of it mattered and I’d bet my life that no one else present was following either, though the younger and so more junior atendees were assiduously taking notes, so as to ‘fare una bella figura’ (Google that if you wish…)

The evening all rather took me back to 2003-2005, when I did a part-time MBA at what is now Bologna Business School, so had to sit through TWO YEARS OF TERRIBLE, POINTLESS, PRESENTATIONS.

I was the only foreigner in a class of sixty, the only one to bring sandwiches (we had three children under the age of five, so were skint – everyone else got in cars and drove to a restaurant), and the only one to sleep through the sessions after lunch, due to said sandwiches, and in the front row of the auditorium, to boot.

Italians confuse talking and teaching, which is a shame. My eldest has just started a post-graduate law conversion course in the UK, and attended her first session yesterday. She was as enthusiastic about the experience as I wasn’t.

They’d spent the first four hours discussing problems in small groups, apparently, and working out possible legal solutions. Quite a contrast with the ‘listen in silence and memorise’ approach her younger siblings sufffer at their respective Italian universities.

One bright spot in an Italian college/university education which does compare favourably, though, is the chance to participate in an Erasmus exchange, so students from Italy spending six months at a university in another participating country.

Britain used to be part of the scheme, but in a fit of Europhobia quit, so further isolating itself and denying British youth the opportunities enjoyed by kids in more sensible places.

Anyway, on the bus home from the boring meeting, I was chatting to a couple who had also been there. The usual thing – we rehashed the topics covered, agreeing (while not directly saying so) that it had been a frustrating waste of time, and then moved on to other, more interesting, topics.

They asked how I’d ended up in Italy, so I explained, and mentioned that until recently I’d been an English teacher.

I asked if they spoke English, and they told me their English was ‘scolastico’, or in the woman’s case, a bit better, as she’d done an Erasmus in Holland twenty-years before and had used English daily for the six months she was there.

It was difficult to tell in a gloomy bus, but seemed to me that her eyes were misting over at the memory. Shame she hadn’t kept it up after that, she said.

I was tempted to give them my usual spiel (listen and read a little each day, it’s easy and free these days, with the Internet), but we arrived at our stop, got off, and wished each other goodnight.

Learning a foreign language is a choice, as is not doing so.

I firmly beieve that in this day and age, if you had experience of a language in the past, say at school, there is absolutely no reason why you shouldn’t keep it up.

Unless you can’t be bothered, of course, or unless you have other priorities, and so make other decisions.

My wife, who’s bilingual, actually multilingual, mother to bilingual kids, and married to a foreigner who tuts rudely at meetings, doesn’t actually do much language learning herself. Though she watches TV in English as a preference, and reads English novels on her phone at night. But besides that, she chooses to do other things with her time, which is fine.

But anyone who has some knowledge of a language and would like to improve it, absolutely can.

And if you don’t know how? Then try things and see what works best for you. Learn how you learn.

There are plenty of options online, some of which are our own, such as OnlineItalianClub.com and EasyItalianNews.com, both of which are free.

It’s just a matter of getting into the habit of it.

It’s intended to be good reading/listening practice for anyone at or around intermediate level, but is also supposed to prepare you to watch the actual opera, in the orignal. 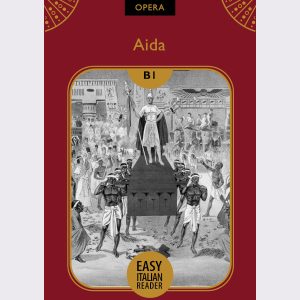 Giuseppe Verdi’s musical exploration of love, jealousy, patriotism and divided-loyalties is here simplifed for learners of Italian (with quotes from the actual libretto!)

Aida, daughter of Amonasro, King of Ethiopia, was captured and is now slave to the Egyptian princess, Amneris, who is unaware of her true identity. Both women are princesses, and both have feelings for handsome soldier Radamès. When Aida’s father leads an Ethiopian military expedition against Egypt, Radames takes command of the defence…

Written to celebrate the opening of the Suez canal, Aida was first performed in 1871 and has been a favorite of opera goers ever since!

Why not begin with our ‘easy reader’ ebook before seeking out a recording of the opera on Youtube? It’ll help! Or just use this original Italian reading/listening practice material to add a little variety to your study program.

Do check out the FREE sample chapter (.pdf) before you buy a copy, though. That way, you’ll know whether the level is suitable and that the format works on the device you intend to use it on.

When your order is ‘completed’ (normally, immediately after your payment), a download link will be automatically emailed to you. It’s valid for 7 days and 3 download attempts so please save a copy of the .pdf ebook in a safe place. Other versions of the ebook (.mobi/Kindle-compatible, .epub) cannot be downloaded but will be emailed to people who request them.

Have you read/listened to Tuesday’s bulletin of ‘easy’ Italian news? It’s FREE!

I confess, I haven’t (I’m always, always one bulletin behind, it seems…) But I plan to, today!