Today will be my third day back at ‘work’, in the sense of actually having to go to a place, stay there for a while, and interact with flesh and blood people in a physical space (while wearing a mask, of course!)

And it makes a nice change, to be honest. On the flip side, though, the time wasted going, coming back, and generally hanging around before and after, makes me appreciate the months spent working from home.

Oh well, neeeds must. And, surely, there are plenty of people who wish they had some place to go and somone to talk to when they got there.

Anyway, being rather less well-endowed with time than I have been recently, let’s keep this one brief, huh?

Remember him? The guy who is STILL reading ‘Il nome della rosa’ in the original, all five hundred and three pages of it, valiant soul that he is?

I highlighted a comment of Rob’s (he was wondering if he was all alone in his long quest) a couple of weeks back. Anyway, now he’s reached the end of another long chapter, the one with Adso’s dream (which, yes, Rob, I found tedious in the extreme when I read it.)

Anyone who was with us back in that fourteenth century monastry in April (doesn’t that seem like a long time ago, already?) and is sufficiently interested, can read what Rob writes here: https://onlineitalianclub.com/il-nome-della-rosa-capitolo-7-uno-strano-libro/#comment-31687

Rob’s update, though, rather begged the question – if someone comments on an older article (say something from last week) or in one of the previous ‘Book clubs’ (from months back), will anyone see it, unless they specifically go looking for it?

Until now, when thanks to the magic of WordPress (the free content management system I use to run the club website) I have now been able to add what’s called a ‘widget’ to the homepage of https://onlineitalianclub.com/.

Click that link and you should be able to see it. On my computer it appears in the ‘margin’ on the right-hand side (that’s called a ‘sidebar’), right below the advert for our school. Where it says: “Join the conversation!” 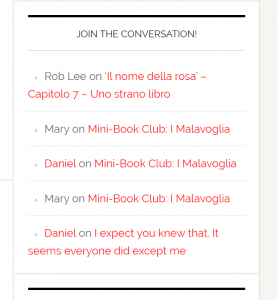 If you’re looking at the website with a smartphone, a tablet, or a computer with a smaller screen than the one I’m using, the ‘sidebar’ with the advert and the ‘widget’ might appear elsewhere than on the right-hand side of your screen, perhaps after the main content of the page, so way down at the bottom. Websites do that these days, I mean they display themselves differently according to what you’re looking at them on.

Anyway, if you look at the picture, you can see that at the time I wrote this Rob’s comment was the most recent (Laura must be sick again…), so at the top of the box. Clicking on it would take you right there so you can read it.

However, it’s quite possible that, were you to try this (by visiting the clubhouse, or clicking on the picture above), Rob’s plaintive cry from the wilderness will no longer be so evident. In fact, if lots of people reply to him (“Forza Rob! Only fifty pages to go! And that’s the best bit of the whole book you’ve got coming up!”), then his comment won’t be visible in the box at all.

But you will be able to see, from the ‘most recent’ comments, WHERE on our website a ‘conversation’ is taking place and, roughly, what people are talking about.

At which point, clicking on one or more of those comments from club members will take you to where the action’s at, so you can join in, or just read.

Which reminds me, ‘just reading’ used to be called ‘lurking’, for obvious reasons, though I haven’t heard the term for years, since ‘social networks’ gave the world a ‘better’ (and more profitable for giant corportations) way to interact with each other.

So there you go. Need someone to chat to? No need to get on your motorbike and ride through a storm (the weather here in Bologna having been truly awful this week) – just trot along virtually to https://onlineitalianclub.com/ and “Join the conversation!”

N.b. Comments are ‘moderated’, which means that they aren’t visible immediately after you’ve written them (so no need to press the button multiple times or get frustrated…) This is not a ‘real time’ system, in fact, it’s a much older (and cheaper) technology than Facebook and crew offer.

At times, I’ll be able to approve comments so that they become visible within a few minutes or hours of you writing them. Othertimes it might take longer, if I’m asleep, for example.

Think of it as a ‘slow’ conversation, as in ‘slow food’, so intrinsically better than the unhealthy ‘fast’ alternative. Or like writing a letter and popping it in the mailbox. Remember what fun that used to be?

Commenting is also possible over at EasyItalianNews.com, which now has over six thousand (!) subscribers (subscribing is free.)

If you look at the homepage, even scrolling down to the bottom, you won’t see any space to comment. So what gives??

Clicking on the title (for example yesterday’s: EasyItalianNews.com 9 giugno 2020 ) will take you to the page for the latest bulletin https://easyitaliannews.com/easyitaliannews-com-9-giugno-2020/.

At which point, having clicked on the title, if you scroll right down to the end of the ‘easy news’ bulletin that interests you, there you will find what we experts call a ‘comments box’, cryptically entitled ‘Leave a Reply’.

My wife, Stefi, who edits EasyItalianNews.com, checks for comments each time she logs into the site, so at least three times a week. Usually there aren’t any. But in the past, people have asked questions about a word or phrase they didn’t understand, moaned about the audio being too fast, or written something supportive.

And now you know how to do the same, if the mood takes you.