I don’t normally dream about teaching.

Perhaps it’s knowing that I’ll have some courses starting soon and so will be back in the saddle. Or maybe it’s witnessing my daughter’s misery as she spends the entire week waiting for an oral exam at university (online, of course.)

The poor girl is number fifty-seven on a list of more than a hundred, so spends her days at the computer watching her professor publicly torturing, one by one, her classmates.

Each student gets forty-five minutes to either convince the prof. that they can answer any question she can dream up, make some fatal error, or simply to clam up in terror and so have to endure the humiliation helplessly until their time is over and they are informed that they have failed. Tears are common, apparently. If there’s a glitch in your Internet connection, you fail. If a watching classmate, with microphone acccidently unmuted, mutters an answer, you fail.

The idea of classmates watching the professor ‘interrogating’ those whose surnames come further up the alphabet, by the way, massive waste of time though it may seem, is that this will help them revise the material that they’ve been memorizing for weeks or months, as well as providing valuable clues to the teacher’s approach: some professors are kind and helpful, seemingly genuinely wanting their students to answer correctly. Others less so.

The Italian university system evolved in the middle ages when there were no computers, or even paper, so oral exams were the logical choice then. Change has been resisted ever since. My Italian family assure me, however, that one bad-tempered but highly-paid teacher working eight hours a day for more than a week in order to orally evaluate a class of more than a hundred first-year medical students on just one of the forty or so exams they will need to pass before graduating is an efficient and objective approach.

Well of course it is, I reply sarcastically. That’s why Italy is so well-known for cutting-edge educational techniques and is home to world-class colleges that attract students from all over, desperate to pay big bucks for the authentic experience of old-style public humiliation.

Anyway (which is a VERY useful term for managing the flow of a conversation – I just had a Turkish lesson and in Turkish it’s ‘Neyse’. In Italian it would be ‘Comunque’. If you don’t know and use the term, learn it now), back to my dream.

My daughter, I think it was her, or one of them anyway (again!), along with a bunch of classmates, was in a room someplace studying English phrasal verbs with ‘make’ (make of, make up, make over, etc.). Goodness knows why – it was a dream.

And basically, what they were doing was to write down a translation into Italian for each term, laboriously found in a dictionary made of (which isn’t one) paper, then memorize them, then test each other. I guess they were working together, to make the whole process quicker.

I suppose I’d been told to go help, probably by my wife, as I can’t imagine I would have volunteered. So of course, I thought that the most useful thing I could do was to point out to the young people that, ragazzi, if you attempt to memorize a list of very similar-looking items in no particular context it will be both hard and, in the medium-long term, ineffective.

In the weird way of dreams, this I tried to do by showing them a photocopied and much-enlarged photo from a newspaper article – perhaps it was a street scene, maybe people and cars:

“Look very carefully”, I instruct, “What can you see?”

“People and cars”, they reply.

“Wrong!”, I tell them, “I said look CAREFULLY, look closer! What can you see?”

(Remember, this is a very enlarged image…)

“Uh… Just black dots?” one of the brighter students suggests.

“Exactly! If you look very closely, all there is on the paper are black dots. Now tell me, what color is this car?”

“Blue, maybe, or red? It’s too light to be black, too dark to be white or grey…”

“And how did you decide that just by looking at the individual dots? Admit it, you were looking at the picture as a whole, right? How important is any one individual dot in this image? Clearly, no one dot has any particular importance and you will naturally figure out, in your own mind, what the overall pattern represents, filling in missing information as necessary.”

Old bore that I am, I went on to explain to the kids that, instead of studying a list of items and hoping to remember them at some future point, focusing on examples where the item is found in a meaningful context is a.) much easier and b.) much more effective.

And that no translation is necessary, because the combination of context and meaning should allow the software in your head to do it automatically. And in any case, the dictionary translation might be wrong (a different use of the same word) or inaccurate (some words can’t easily be translated.)

As an example of how your head actually does this stuff:

“Mum and dad had a terrible argument last night. But now they’ve made **GAP**.”

If we were studying ‘phrasal verbs with make’ (because it’s in the damn EXAM) you’d know, I hope, which adverbial particle (like a preposition but with no following noun) would fit in that gap. Yes you would, no need to be modest.

You don’t need to know the word ‘peace’ even, assuming you aren’t required to complete the gap, just know what the sentence means. To do that, all that’s required is to understand ‘terrible argument’ and ‘but’ and use your common common sense: a bad thing happened between them but now it’s OK as they made something. Whatever.

Write down an apt and memorable example (“We’ve had a row but let’s kiss and make up, rather than ruin the entire weekend like last time.”) and there should be no real doubt in your mind what the term means – no colored pens, underlining or translation required! If/when you review your notes at some future point, the meaning should just jump out at you, or at least slide smoothly back into your consciousness.

But where to find the memorable examples, you might be wondering?

Ah hah! That’s a question that is problematic only when we put the cart before the horse, so to speak. If you start with a list of stuff to be ‘learnt’ (phrasal verbs with ‘make’, in the above example), then of course you have that issue. Finding memorable examples is more work than just slapping down a translation, albeit more effective.

However, if you instead spent your time reading, then assuming the text you’ve chosen to read is more or less appropriate to your level (our ‘easy Italian reader’ ebooks for example) then your cup should be overflowing with memorable examples, many or most of which will contain at least one unknown word.

The following lines are from the ‘introduzione’ to ‘I Malavoglia‘, which is level B1 (intermediate):

‘Opera’ here could mean ‘work’, what do you say? And we’re on about Verga’s ‘capolavoro’ (head work?), one of the most famous ‘works’ of the nineteenth century, so maybe ‘masterpiece? Never mind though – it’s clearly an important book…

‘Apparteneva’, a verb, ‘belongs to’? Hang about, it must be past, so ‘belonged to’ or ‘was a member of’, maybe, the Sicilian ‘bourgeois’, upper-middle class? But his ‘protagonists’ (characters, heroes?) were almost always members of the ‘ceto popolare’ (popular class? Ceto reminds me of whales, for some reason…)

Memorable examples aplenty, and loads of words to learn! But…

Remember the black dots and the big picture?? Focus on the individual dots and you won’t know that the car parked in front of the Post Office is blue?

Do you think you’ll meet ‘capolavoro’ or ‘ceto populare’ again any time soon?

But if you DO, won’t you have at least some memory of what the terms might mean, even WITHOUT all that tedious studying and memorising?

And if you see those terms again, then again, and again, again, don’t you think they’ll just naturally merge into your general understanding of the language?

Of course, that’s IF you’re doing the reading, which is ASSUMING you’re not spending the same time making lists of words with translations, or writing down (as not really suggested above) memorable examples.

If you have a test, if you risk being humilated by some over-privilaged, power-crazed sadist because you can’t DEFINE each term precisely, under pressure and with a hundred classmates sniggering at you, then by all means, memorise translations and use memorable examples. Or quit, which is probably the point.

But otherwise, language is as close to infinite as for a normal person, such as you or I, makes no difference. Plus, it’s changing all the time. So sooner or later, you’ll have to learn to look at the picture, rather than at the dots.

When your Italian is super-advanced, there’ll still be words you don’t know by the bucketful. It’s just that you’ll have learnt to ignore them most of the time.

So why not begin today?

N.b. The kids in my dream went back to their colored markers and dictionaries. “You don’t understand”, they insisted, “We have an exam!”

Here’s a final reminder about this week’s new ‘easy Italian reader’ ebook, the third in our series of short and simplified versions of selected classics of Italian literature. 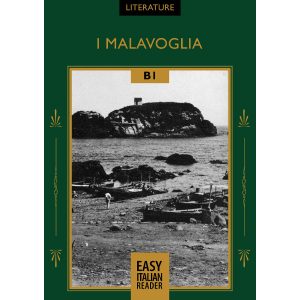 The special launch offer – get I Malavoglia for just £5.99 – ends Sunday night, after which it’ll cost the usual ebook easy reader price of £7.99.

N.b. You can see how other club members are getting on with this story over at our
‘Mini-Book Club’ page. Scroll down to read the comments and add your own.

And of course, don’t forget to read and listen to Thursday’s bulletin of ‘easy’ Italian news. It’s free, as is subscribing so as to get each thrice-weekly bulletin sent directly to your email inbox!