How do you say “My head is mixed up” in Turkish?

And that was what I wanted to say this morning, during my lesson with an online teacher.

So as I was chatting away happily in Turkish, Swedish words kept popping out.

For some reason I don’t understand, it especially has problems with conjunctions (and, but, or, because and so on…)

Ayşegül and I agreed on one thing: when you first start communicating with someone, the language that you use at the beginning is the one that tends to stick.

Also that it takes extra effort to switch.

She always speaks Turkish with her Italian husband, while I always speak English with my Italian wife.

Were we ever to sit down to dinner together, all four of us, I expect there would be some subconscious negotiation process before we settled on a common language.

Which might be English or Italian, who knows? It would be interesting to see.

She tells me that a friend of hers (a Russian woman who teaches English to children in Moscow and is learning Turkish, like me) believes that you always have to speak the language your students are learning.

I’m not sure I agree, as with my pre-school class (Italian children supposedly learning English) I often use Italian, and they seem to have no difficulty with me switching languages, as long as they feel safe and know what’s going to happen next.

It matters not to them if I say “Stand up!” or “In piedi!”, as long as my hand gestures are clear, always assuming they’re in the mood to do the actions for “Head, Shoulders, Knees and Toes“.

However, it’s certainly more straightforward if you stick to one language – and as a student you’ll learn more that way.

Arguably, the point of doing a lesson IN the language you’re learning is not so much the content, the grammar explanations, the details, but the medium itself – getting used to, and developing strategies for hearing and using the unfamiliar tongue.

It takes time to learn to say “Efendim?” (Pardon?) when you don’t understand something, rather then “Ursäkta mig?” (Excuse me?), “Scusa?” or “Sorry?”

I’ve had over a hundred hours of online Swedish lessons (mostly speaking).

That compared to just twenty-five hours of Turkish, though I lived there for three years in the ‘nineties and my first wife was Turkish.

I never took Italian lessons (well, just a handful…) but have lived here since 1998.

And I have no memory of learning to speak English, but have been doing so sucessfully for more than half a century!

But it’s a natural process and IF you get the practice, you brain will get right on with the job.

How to get that practice?

By default I do forty-five minutes of Swedish news each weekday (two separate broadcasts, each repeated three times).

If I miss them, I stay up later to catch up.

And I have the radio on whenever I’m working in the kitchen at home (Swedish or Turkish, according to whether I’m in the mood to reason or to dance…)

This approach is easily copied.

At the very least, subscribe (FREE!) to EasyItalianNews.com and read/listen to the thrice-weekly bulletins you’ll be sent via email.

Give it a few months. Then, when you feel ready, start with authenic radio :

As well, not instead!

The more you listen (and read), the more you’ll understand and the more orientated your brain will be…

All of which builds an excellent foundation for practicing speaking.

Let’s assume for the moment that you have both time and money to spend on learning Italian.

Not everyone has, of course. But everyone can make choices. Everyone has SOME time and SOME money.

Buy online lessons during one of our offers and you could be doing a half-hour lesson, say twice a week, for about $30 a week.

In a month, that comes to what you might spend taking the kids (or grandkids) for a pizza – in a ‘proper’ pizzeria, at least.

With wine for dad and mum, and dessert for the little ones.

For that I’ll expect to improve at least a level a year (in both languages!)

Lucia, our teaching manager, recently wrote to our online students asking them to leave a review, which many did.

You can read them here.

Check out the reviews and you’ll notice one comment that keeps cropping up: “I was terrified, but now I’m so glad I did!” or words to that effect.

Which is exactly how I feel about my own online lessons.

I was really, really nervous before the first one (about eighteen months ago) and honestly could barely speak a word of Swedish.

Certainly not more than “My name is Daniel” and “I live in Bologna”.

These days the lesson or lessons are the part of my week I most look forward to.

For me, they’re like meeting up with a friend for a chat.

Anyway, all this is to let you know that (for those of you who haven’t yet given online Italian lessons a try) next week we’ll be offering the chance to do a FREE TRIAL LESSON!

There’ll be no obligation to buy, but anyone who would like to do so, once the FREE TRIAL LESSON is concluded, will be sent a discount code to enable a juicy saving on the regular cost.

More about that on Monday.

To finish, I’m reposting the ‘T-shirt’ offer from Wednesday, as Chris and Eva (former online students themselves) were disappointed that the pictures of their attractive designs didn’t show up… 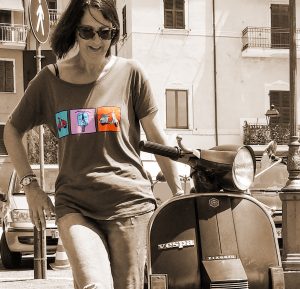 We’re delighted to be able to offer OnlineItalianClub members a very special offer from our friends over at Shabby Sheep Design who create fun and funky original Italian themed printed t-shirts and accessories (like tote bags and chefs’ aprons).

They have a wide range of inspirations for their collections, including Gelato, Prosecco & Spritz, Vespa & Cinquecento and a new range which appeals to people who may not be lucky enough (yet) to live in Italy but who nonetheless have their Heart in Italy.

Shabby Sheep Design is run from their home in Tuscany by English wife and husband team, Eva and Chris (with the help of their rescue dog Lazarus!) 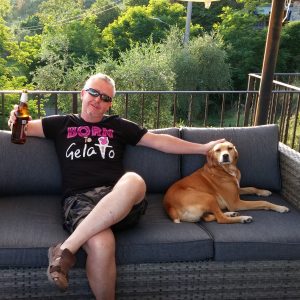 Eva and Chris moved permanently to Italy about 14 years ago to set up a B&B and run painting holidays (Eva is an Abstract Artist) and have also been involved over the years in a variety of projects, such as villa rentals and swimming pool maintenance. Now they have settled back in to semi-retirement and are focusing their attention on their ‘lifestyle’ business, Shabby Sheep Design.

Both Eva and Chris (Intermediate Italian speakers) signed up for a series of Skype based conversational lessons last year and were paired with with OnlineItalian Club tutors Augusto and Chiara respectively. Afterwards they praised OnlineItalianClub (shucks), saying they were delighted with the kickstart it gave them and the general boost to confidence.

So head over to Shabby Sheep Design and if you see something you like then to get your 20% discount (available until the end of February 2019) use code: OnlineItalianClub20%