Ever felt you couldn’t be bothered?

I mean with learning a language, obviously, rather than with life. Though that, too.

Yesterday evening at reception, I was chatting to an Italian woman who had decided to pay us for four more months of English course, having reasoned that if she bought the additional lessons she’d force herself to make use of them.

I pointed out that she was describing the business model of gyms and fitness centers – each year in January they roll out irresistible offers on annual memberships, aiming to sign up loads of people, while knowing full well that most of the new clients will have disappeared by the beginning of March.

Just because you pay, doesn’t mean you’ll keep coming, I warned her (before she paid). But she seemed convinced that it would be the right choice.

Unless she paid, she wouldn’t be able to motivate herself to come to the lessons, she repeated.

Her colleagues already thought she was mad.

They’re heading off to a chic bar for a relaxing after-work drink and she’s going, where? To an English course?

I dislike that ‘business’ model and so try to discourage people from believing that all they have to do to learn a language is pull out some plastic.

However, I do admit to having reasoned similarly in the past…

Back in June, I paid for twenty more Turkish lessons, having not yet finished the previous twenty, so as to give the teacher some cash to tide her over the summer and so ensure that I would be continuing my hour a week of Turkish conversation practice when September came, and throughout the fall.

One time, a few years back, I bought the biggest pack of online Swedish lessons offered by a competitor – forty hours (twice!) – due to the fantastic discount they were offering for quantity.

I’d exchanged emails with the owner of the company for some reason, and he’d told me he was able to price a large quantity of lessons so cheaply, while still paying the teachers a reasonable rate, BECAUSE MOST PEOPLE NEVER FINISHED THE LESSONS THEY HAD PAID FOR.

Cynical bastard. And I daresay, hiring teachers who had no real idea what they were doing did no harm to his bottom line. Though he swore, against all the evidence, that his staff were well trained and had been selected for their competence, etc.

Mate, I could have said but didn’t, I’ve been teaching and running language schools for getting on for thirty years now, and I can tell you for a fact that if you hire people who have no formal training and whose experience is counted in months rather than decades, the result will likely be unenviable.

You might get lucky a few times, but the OVERALL quality of the teaching will likely be low. Don’t kid yourself. That’s why ‘proper language schools’ have at least a core of permanent staff.

Anyway, I digress. I was writing about that feeling of not having the motivation or energy to get stuff done.

It’s a mood which likely affects us all at times, and was mine before I started writing this: OMG, Wednesday again, gotta write something for the club!

Starting an article, deciding on what to write about, is often a chore. But when it’s finished, it seems the time and effort employed were worth it.

I often get that feeling on days when I have online lessons scheduled, though I always enjoy them and once we’re done, I’m invariably glad I did bother.

But when it comes to actual STUDYING, I’m as listless as the next person. More so, probably, as I can invariably think of a million other things that should take priority.

I won’t say I never study, but it’s very, very rare. Perhaps once a month I read through the notes that my Turkish teacher writes each week during our lessons.

And it was at least a year ago, after passing the A2 exam in Swedish, that I bought the B1/B2-level course books, got part of the way through Chapter 1 – out of 20 – then put them away neatly on a high shelf in my ‘study’ (which is in the garage, the Italian equivalent of the English garden shed – where we men go to get out from under our wives’ feet…)

I regularly feel bad about not having got further with the B1/2 books – I HATE wasting cash!

However, that feeling of regret, a fear of missing out I suppose, can only take you so far.

And for at least twelve months now, it hasn’t been powerful enough to get me started on Chapter 2.

You know what, though?

As I write this, and probably for the next hour or so, I have the radio on.

And I read the news headlines in French and Swedish before forcing myself out of bed.

And yesterday I was chatting to some Turkish students who came to the school for their weekly Italian lesson.

All of these things are habits, and if something is a habit, you’ll do it anyway, bothered or not, no forcing-yourself required.

I guess that’s what my English-student was saying, yesterday evening.

She’d ALREADY established coming to our school, going to the lessons, as a habit.

She enjoyed it, she said, liked the teacher, and felt that if she kept at it, even though her colleagues thought she was bananas, she’d end up with a career-enhancing improvement in her language skills.

I hope that works out for her. 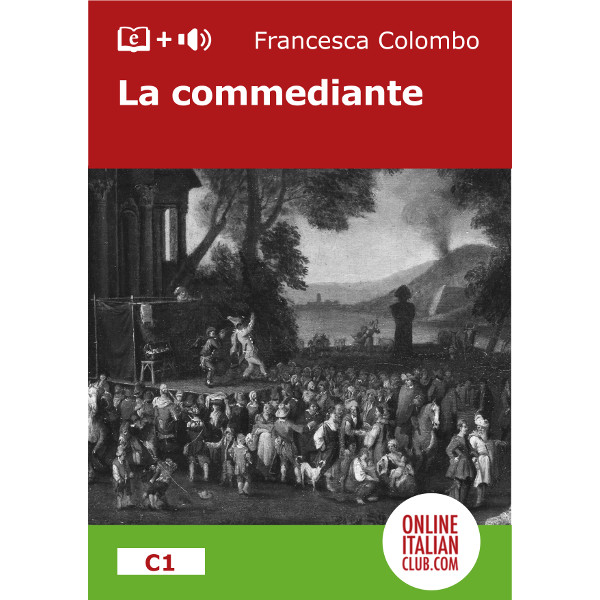 Check out the free sample chapter (.pdf) to get an idea of the level and length of the material.

And don’t forget, either, the audio for the entire story is available free online – you’ll find the link to the audio at the top of Chapter 1 in the free sample chapter (.pdf) download.

And here’s the usual reminder to read and listen to Tuesday’s bulletin of ‘easy’ Italian news (it’s free!)