Anyone who’s already bought it will want to know this, and maybe others too, as it concerns the dreaded ‘pronomi’!

How did this happen? How is it possible? I raged (not at Tim, obviously. We like Tim.)

Well, basically, our writers hadn’t used an exercise of that type before, and the processes we use, when taking the raw text from the writer and, over multiple stages taking several months, turning it into a finished ebook, ready to sell to you guys, begin with one FUNDAMENTAL step:

1.) Cancel all formatting added by the writer!!!!

The words ‘writer’ and ‘formatting’ merit a skull and cross bones icon, so here’s one: 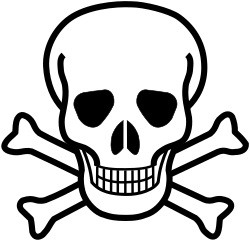 What we do is copy the whole text from whatever exotic Microsoft, Google, Apple file the writer sent it in (maybe from their phone, or from some trendy app, who knows) into a very simple, no frills at all, .txt file.

That copy and paste, at a stroke, deletes bolding, italics, underlining, centering and so on and so forth. Every bit of fancy, GONE, in the blink of an eye.

Though then we have to manually go through the .txt file to delete the hundreds, or even thousands, of extra lines, spaces, and random junk that the writer has helpfully thought to include, so as to make things look nice.

It takes time, it’s a pain in the nether regions, and you might think we’re making life harder for ourselves, creating unnecessary extra work.

Because there are no two people on the planet capable of formatting a text to standard specifications, precisely, every time (even when following clear instructions.)

And certainly no two writers, every single one of whom has their own way of doing things.

and so on. Play with the punctuation marks, spacing and capitals I’ve used there and I bet you could come up with fifty or so variations.

I confess, it makes me froth at the mouth when writers capitalise words that aren’t proper nouns or positioned at the beginning of a sentence (i.e. in a glossary, see above)

And I absolutely SPIT when people use capitalisation for titles, which is an execrable Italian habit.

So imagine my face when I get to

and have to carefully retype it as:

adding a full stop, being sure not to use a P in ‘porto’, and knowing that I will have to do exactly the same thing for the other seven chapters (editors and proof-readers can be inconsistent too, though we try hard not to be!)

Beh, you get the idea. Writers write, they have ideas, do research, develop plot lines, do sparkling dialogue, and, hey, maybe tug a little on readers’ heart strings, which sells ebooks.

They can’t be expected to mess about with punctuation and formatting, can they?

Except that the buggers do precisely that, though in their own idiosynchratic and inconsistent way.

Teachers can’t fill in class registers, or be expected to start/finish their lessons on time, but are often loved despite these flaws. Same principle.

Ah, yes. So we stripped out all the lovingly-inserted, but personalised and, at times, random formatting so as to ensure the final product would be, at the very least, consistent in itself and with our other publications.

And on this occasion that deleted information which was vital to the reader.

No matter, there followed multiple stages of formatting, editing, audio recording, and proof-reading!

Anyway, here’s our first ever errata-corrige (actually, it’s just an erratum according to Wikipedia), which should show Exercise 4 in all its glory, underlined words included. Thanks Tim!

Anyone who bought the ebook will already have those, of course, but dai – it’s Friday!

So here they are for grammar fiends who think £5.99 is too much for an ebook:

Here’s a final reminder about this week’s launch offer on Colpa della terra, Libro 1, Colpa della terra, the first in a new, five-part series of ‘easy reader’ ebooks about an Italian family that emigrates to the USA at the end of the nineteenth century. 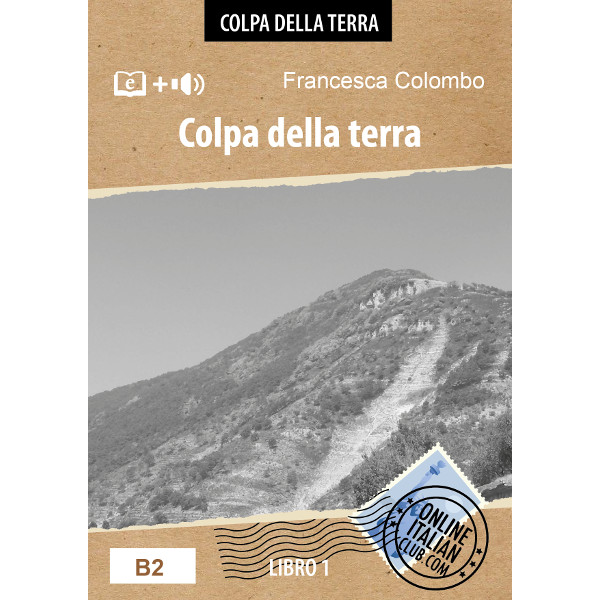 We have Libro 1 this week, and for those who enjoy it, Libro 2 on Monday.

Libri 3 and 4 are scheduled for publication in May, and the final one in June.

The first in a series of five ‘easy reader’ ebooks which tells the story of three generations of an Italian family that emigrates to the USA.

Libro 1 begins in 1895, in the village of Siano, Salerno. The narrator is Santo, a father of three who has fallen on hard times. The story opens as Santo welcomes home his childhood friend (and former rival in love), Cristiano, who after nine years has returned from across the ocean with tales of opportunity…

The team at EasyItalianNews.com are this week appealing for donations, to meet the costs of paying the writers, editing, and technical bits and pieces such as website hosting. The previous appeal was in January 2022, so they’re doinging them on an every-other-month basis, for the moment.

Many thanks to all those who’ve already generously supported that project with gifts small or large. Your cash helps the team make their educational material available for free to anyone who needs and values it, no matter their means, or where they may find themselves in the world.

As of now, EasyItalianNews.com has 11,798 subscribers, which is pretty cool. Each of them receives the thrice-weekly bulletins of ‘easy’ news (text plus audio) via email, immediately after they are published on Saturdays, Tuesdays and Thursdays.

And/or you could help us pay our bills, in which case check out the ‘donate’ page.

There are four currency options, an option to specify the amount, an option to make regular monthly donations and, for the technically-challenged, step-by-step instructions (with pictures!)