Here’s an expat reminiscence for you (I’ve been living in Italy for over twenty years.)

Since my early days ‘abroad’, I was an avid reader of The Economist, a British weekly magazine which is packed with interesting articles, not just about politics/economics/business but also on cultural and scientific themes.

Back in the day, I didn’t really know Italian and hadn’t the budget to buy English-language books or newspapers. But The Economist was available in a local library and had so much in it that each weekly edition would keep me going until the next one came out.

Eventually I gifted myself a (rather expensive) annual subscription and renewed it faithfully every twelve months for what must have been fifteen years.

The result being that my politics became rather more free-market liberal but also that I accumulated an extensive general knowledge of topics that I’d never actually studied, for example medical technologies.

Eventually my Italian improved to the point where, if I had chosen to, I could have managed to support my reading habit with Italian books, newspapers and magazines. But often they were no more affordable, so, for the most part, I stuck with what I knew.

That was until a few years back when I realised that if I was only going to read in English, I’d not have time to immerse myself in other languages that had begun to interest me, primarily Swedish, then subsequently French and now Spanish.

So eventually I let the Economist subscription lapse and made an effort to build the habit of reading in other languages instead of English. To a large extent, I did the same with broadcast media, switching from the BBC world service (an expat’s lifeline in the days before the internet, when you could pick up their broadcasts on scratchy shortwave radio) to listening in the languages I wanted to learn.

Anyway, after a while I realised that Le Monde, El Pais and Swedish newspapers you likely won’t have heard of, also featured fascinating articles on culture, science, technology and the like.

Which brings me full circle, and up to the present day. There was a thing in El Pais, last week, about cancer, probably a report on some recent research. I heard the same thing being discussed on France.info, and skimmed an article on the same topic on the Swedish TV news website, so it must have been a trending topic. If you’re a news fan, you probably read or listened to something similar.

I forget now what the point of the research was, other than that many more of us will be diagnosed with cancer in the future (don’t panic – it’s because we’re not dying of other things first, so basically good news.)

But the article mentioned advances in treatment, such as combination therapy. If you got cancer in the past, you may have been offered radiation therapy, or chemotherapy, or surgery, according to your diagnosis and the likely prognosis. In time though, it was understood that in certain situations a combination of approaches might offer a better outcome.

The same is true with medications, for example for AIDS. Drug A might help, as might drug B, but it turns out that a judicial combination of the two medicines could result in a near-normal life expectancy, in effect turning what used to be a death sentence into a chronic condition that could be managed (assuming you live in a country with a developed healthcare system…)

Back to language learning, then. I’ve been back on Duolingo for a couple of weeks, working my way through their Spanish course. But as I mentioned, I’ve also been trying to read an article or two from a Spanish newspaper website each day, and last Friday I had my first online lesson (though I could say little more than “¿Puedes decir eso otra vez por favor?”)

The cancer article from El Pais suggested this metaphor for my approach to Spanish: sure, Duolingo is free and fun, but doing only that would perhaps not be as effective in the short-to-medium term as doing that AND other language-learning activities, such as reading and listening to simplified and/or live media.

I made that mistake (trying to finish DL before doing anything else) with Swedish, and I won’t repeat it!

So I did a simplifed ‘easy reader’ El restaurante, and plan to do more. Plus the authentic newsper articles, plus the online lessons (I have another this week).

I still have to fit in regular listening, but I’ve done at least some, and plan to make it a habit. At the weekend, my wife and I even began a Spanish TV series on Netflix ‘La casa di carta‘. We selected Spanish audio and Spanish subtitles, so understood little of course. But the first episode was gripping enough to keep our attention, so we’ll likely keep watching.

You’ll be thinking, but doesn’t spreading yourself this thin just distract from making progress with the grammar/vocabulary syllabus?

You might think so, but reading listening to more extensive (and also authentic) texts makes the Duolingo examples seem very easy, and so allows me to focus on the teaching point (comparative adjectives, say) rather than sweating the construction of sentences or the occasional unknown word.

E poi, when I get back to El Pais or whatever, the stuff I’ve just been focusing on in the app seems to magically pop up everywhere I look. The learning from the app is reinforced by seeing/hearing multiple examples of it actually being used.

Study the grammar and vocabulary until the end of the syllabus and THEN start using the language?

Which of course is what ‘real language teachers’ have known for decades. Look in any modern foreign language course book (except perhaps Italian ones…) and you’ll likely see a mix of grammar, vocabulary, reading and listening activities, and speaking/writing tasks.

‘Teach yourself’ material tends to be more limited, I don’t know why. Perhaps because it sells better? Perhaps because a focus on grammar is what buyers expect? That’s the sad face of marketing – give the customers what they want, even if it’s not what’s best.

For the real world, though, so for my trip to Spain in June, what’s needed is not a comprehensive knowledge of grammar but many hours of practice understanding some of the more common structures and lexis. as well as experience using them, however imperfectly, in real time.

Latin, a so-called ‘dead’ language, can be studied as if it were an academic subject, with no real-world applications. But if you’re learning Italian, or Spanish, then presumably you’re hoping to use it to talk to people?

If so, what’s needed is not just ‘studying’ but also ‘training’, not just focusing on ‘discrete items’ (words, sentences) but also on longer texts, using ‘authentic’ (fast, harder, real!) materials as well as stuff that’s been designed to help you take the baby steps.

If you’re a beginner or elementary-level student of Italian, don’t forget this week’s ‘eBook of the Week’ offer on Yue a Bologna, which is half the usual price until Sunday night. 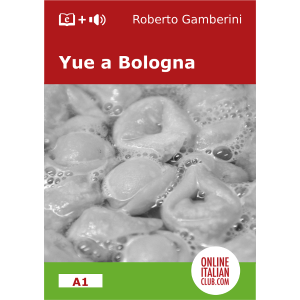 And the whole story is available to listen to free online: https://soundcloud.com/onlineitalianclub/sets/yue-a-bologna

What if that one’s too easy? Then follow the Catalog link to discover all our ebooks, organised by type and level, each with a free sample chapter.

Tuesday’s edition of EasyItalianNews.com is shorter than usual (someone messed up, apparently.)

And the science writing isn’t as good as that in The Economist, or El Pais. One of our writers thinks the sun’s a planet, it seems.

Over five thousand people already have, so you’ll be in good company.