A quick one today, as I’ve had a busy week and am supposed to be taking it easy.

Which is something I’m clearly not very good at, as evidenced by the fact that I had my laptop open on my hospital bed in the Stroke Unit a few weeks back – while I was all covered in wires and poked through with needles.

But today’s Friday, so I’ll cheat a little!

Thanks, by the way, to the various people who emailed about and commented on Wednesday’s article.

Apologies for not having replied personally, but I’ve been rushing around preparing English lessons for Italian kids and adults, this having been the first week of teaching.

Yesterday, besides the teaching, I was also formatting ebook texts for future publication. One was about ponchoed revolutionary, Garibaldi, and his adventures in Sicily, which will be part of our popular ‘Day in the life of…‘ series (publication date not yet decided, be patient!)

Another was part of a NEW series about the Italian diaspora, which I expect there will be plenty of interest in. We already have ready volumes about Italians in Scotland (of all places – think ice cream parlours and fish and chip shops) and a second about Italians in Spain (Roman legions, volunteers in the civil war, and so on.)

Francesca, our regular writer, is doing a volume on Italians in the USA, the content of which I can only guess at as it’s still being written. She tells me there’s a lot to say, so I’ve agreed to pay her more than usual.

Which got me thinking about all the cliches that constitute our ideas about what is typically Italian… The mafia, vespas parked randomly so as to block the passage of pedestrians, wild hand gestures and so on. Scotland’s icecream, Spain’s love of Italian pop music, the Sopranos, corruption, hitmen.

Add your own noun to complete the simile, but I’m willing to bet that no one would have come up with ‘… a ponchoed revolutionary’!

As Italian as spaghetti, maybe, though when I was up in the Dolomites on a weekend break in September there was no sign of any, the local food being more Central-European in its influences.

(Here in Bologna we pride ourselves on the flat pasta, so tagliatelle and lasagne, rather than the wiggly, indisciplined Southern-Italian nonsense.)

OK then, so what about ‘As Italian as Clint Eastwood’?

Sadly, Wikipedia insists that the famous actor is

“of English, Irish, Scottish, and Dutch ancestry. He is descended from Mayflower passenger William Bradford, and through this line is the 12th generation born in North America.”

So definitely NOT Italian then, but bear with me, I’m getting to the point.

This all puts me in mind of another ebook publication, and this one is imminent!

Full marks to anyone who had guessed where this was heading!

Below is an extract from our text, which will be the sixteenth title in our Italian Cinema ‘collana’ of ebooks (‘collana’ means ‘necklace’, but also ‘series of books’, for which I can find no English equivalent): 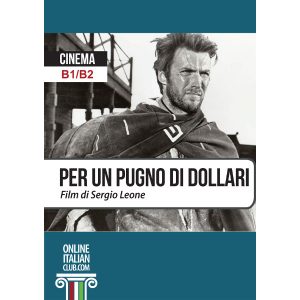 In 1964, ITALIAN director, Sergio Leone, and his crew of ponchoed revolutionaries, decided to give the jaded genre of Hollywood westerns (think John Wayne – named ‘Marion by his mom, apparently) a kick in the butt, and do a cowboy movie in the much more ruthless and bloody but just as moralistic, Japanese samurai style of story-telling.

For younger readers, Quentin Tarantino, another ponchoed revolutionary (“His father is of Italian descent, and his mother has Cherokee and Irish ancestry“), basically did the same thing, nearly forty years later in 2003, with Kill Bill – although there were cowboys AND samuri swords in that one.

The difference? Here’s at least one – director Tarantino didn’t feel the need to change his name for American audiences, whereas presumably Leone or his U.S. distributors figured that box office receipts would be greater for a film from the unknown but reassuringly-named ‘Bob Robertson’ than for something created by a, sniff, European.

Which brings us back rather to our as-yet-unfinished ‘Italian diaspora – Italians in the USA’ ebook (publication date to be announced, so don’t bug me.)

Populations assimilate, things settle down, move on, and perhaps one day countries even take pride in their (real, not immaginary) history. Clint’s ancestor may have come over on the Mayflower, while Quentin’s could have been processed through Ellis Island, but in the end, who cares? We’re talking a few hundred years difference, at most.

But I’m getting way ahead of myself! This morning I’m supposed to be warming you up to spend your ‘learn Italian’ budget on Monday’s new ebook!

Today then, why not take a look at the FREE SAMPLE CHAPTER (.pdf), to get an idea of the level and read the first few exciting scenes? Clint rides into a dusty border town on his mule. A group of locals, assuming he’s of no account, give him grief, so…

The movie is re-told for you, in simplified Italian, by our regular writer Giovanni Galavotti who, when not teaching Italian, is an actual award-winning scriptwriter (go ahead, Google him!) And so the perfect person for the job.

Giovanni sent me this text back during the lockdown (I forget which), with a note saying that the Italian version of the movie was available on Amazon Prime and I should take a look.

So I read his text, which is intermediate-level so rather short and quick to do, opened a can of cold German beer (sorry but Italian beer is either bad or horrendously overpriced) and watched the movie.

Not only is it a great movie, but Giovanni had it summarised to perfection. This one is going to be worth £7.99 (£5.99 next week only) of anyone’s cash, I promise. Especially if you can locate the film to see afterwards.

N.b. the FREE SAMPLE CHAPTER (.pdf) has a link to the online audio (for our ebook, not for the film, obviously), which is available entirely free of charge, no purchase required, and for the entire text, not just the introduction and first chapter!

So if you have a good level in Italian, say B2+, and think you can manage without the supporting .pdf, why not listen to all eight chapters? They’re on me.

Don’t forget our other resources, will you?

And don’t forget – do one small thing…