Translating – as a job, it’s not ideal.

What with Google Translate and so on these days, people think it’s easy.

And fast to do.

Nothing could be further from the truth.

And if you translate to earn a little extra cash, you’ll soon realise that your clients are far from perfect either…

The work, if not exactly ‘urgent’ (for which you would drop everything but charge double) always needs to be done ‘as soon as possible’.

The client may have hung on to their precious text for months but will surely need the translation in double-quick time.

Oh, and they won’t have checked the text carefully before handing it over to you. So it’ll probably be pretty slapdash, with errors that’ll need checking, references to images or tables that aren’t ready yet, and so on.

If you’re lucky enough to get well-paid work, it’ll likely be because no one else has the slightest idea what the hundreds of specific technical terms in the text refer to. I know, let’s pay someone else to do it, then we can blame them when it turns out to be gibberish!

In the eventuality that you find yourself translating from Italian (just don’t…), the original text, whether a business letter, a contract, or something else that the writer wanted to appear highbrow, will have been written in that incomprehensible ‘formal’ style that educated Italians are so proud of being able to write (but will do anything to avoid having to read…)

In which case, not only will you spend hours scratching your head trying to work out what the original text means, then finding equivalent incomprehensible and off-putting terms in English, but if you dare to render it into reasonably-intelligible English, the client will check it line by line before coming back to you fuming because it wasn’t what they wanted.

It’s supposed to be ‘formal’, they’ll say, through gritted teeth. Don’t you know English? The style is completely wrong!

Which reminds me of a neighbour of ours, a young economics professor who needed his ‘paper’ translating into English ‘for publication’ (his work had always been rejected when he wrote it directly in English himself). He asked me to help, which reluctantly I agreed to do.

After having spent the best part of a week on it, I emailed it off a few hours before his deadline, only to have him banging on my front door accusing me of having subcontracted it to ‘someone who clearly isn’t a native-English speaker’.

It seemed the English version didn’t read as he’d imagined it would (i.e. it could be understood.)

That was more or less the end of my translation career, apart from occasional gigs for a lovely buddhist who now and then sends me his calming reflections on meditation techniques, already written in reasonable English, to tidy up for publication.

But that’s proof-reading, a proper job for a teacher/writer!

All that said, as long as there are no actual clients (or at least no Italians, who are convinced that effective written communication means 10% content and 90% percent bullshit), translation can sometimes be fun!

As can picking holes in other people’s translations.

My Turkish teacher, for instance, pointed out the other day that the Italian subtitles for the Turkish crime series that we’re both following on Netflix are inadequate because they fail to faithfully translate the cursing.

The Italian version is much too polite, apparently, so lacks the flavour of the original.

But anyway, all this is by way of introduction to this week’s SECOND Italian/English parallel text.

On Wednesday I was flogging ‘Quattordici‘, a collection of articles written one summer by my younger daughter, who was then fourteen.

Wanna know what teenagers think? Here’s your chance to find out! 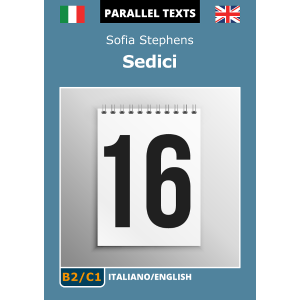 That same summer, her elder sister also wrote some articles (you have to treat kids the same…)

And those, too, have been translated and packaged as a parallel text, this one being called ‘Sedici‘, her age that year.

Hannah, my younger daughter, was writing in Italian, so I translated her work into English myself, which was a pleasure.

Sofia, our first born, being older and perhaps more ambitious when it came to her ‘other’ language (she’s now studying in Scotland), wrote directly in English.

So I asked her mum to translate it for you, retaining as far as possible the idiosyncrasies of the teenage style.

Here we have, then, two different writers – teenagers with different ages and outlooks – which is in interesting in itself, in my opinion.

But also two different translators, both translating into their own language. As I mentioned, ‘Quattordici’ is mine, while my Italian wife, Stefi, (editor of EasyItalianNews.com) did ‘Sedici’

Going back to picking holes in others’ work, one thing we noticed when we used to do translations professionally was that no one translator will EVER agree with the way that another translator has done things.

We’d often say – See this text that so-and-so translated? Can you take a look and tell us it’s OK, before we send it on to the client?

It never was. After a while we learnt to take people’s criticisms with a pinch of salt…

At the end of the day, things can be communicated in many different ways. Style is a factor. And, as I’m sure you know by now, some things just don’t translate!

Have you considered, for example, that in English we may routinely use fourteen or more tense forms, whereas Italians might write everything with just three or four?

Take a look at ‘Quattordici’ and you’ll find that a lot of the Italian version is in the present or the past tense, which I’ve tried to be faithful to in my English translation.

Should I have reworked it with the whole range of tenses that I would probably have used if I’d written it myself?

Perhaps. That’s certainly the sort of stylistic decision that ‘proper’ translators have to wrestle with.

But when you start mucking about with things like tenses, ‘improving’ things, so to speak, you then have to take on responsibility for making sure you do so consistently, not just in the sentence, but at paragraph and chapter level, and across the whole book!

At which point you notice, having decided to tidy things up, that the writer may have started off using only the present, only to bung in a few past tenses, and then, for no apparent reason, revert back to the present.

Down the rabbit hole we go…..

Teenagers are obviously less likely to write consistently with the purpose of making a translator’s life easier, but educated adults can be just as unpredictable.

Oh translator, agonise for as long as you have the enthusiasm, but remember -it’s urgent!

And the client won’t be paying more than a risible amount for your time, if they pay at all.

Also, ask to be paid in advance.

And more advice for would-be translators – if you think it’ll take you a day to do, ask for a week (something better-paid might come up.)

Or, if they want it sooner (say in three days), double your price.

The philistines may not appreciate the complexities of translation, but they know what money is!

The full versions of the two ebooks can be purchased from our online shop:

There are now nineteen Italian/English parallel texts avaiable in our shop – different topics, different levels, though level matters less if you have a translation to compare the Italian to.

View them all here and here.

And with the coupon code below, you’ll save £2 on each one!

into the box in your ‘Cart‘, to the left of the ‘Apply Coupon’ button.

Then press the button and SCROLL DOWN to view the cart total, to check that your discount has been applied.

A final reminder – remember not to forget to listen to yesterday’s Easy Italian News bulletin.

As well as tomorrow’s, for that matter. And Tuesday’s.

Hang, all that remembering is going to be a pain, though.

Why not save yourself a job and just subscribe? (It’s FREE!)

That way you’ll get each edition direct in your inbox, forever!

Or at least until you ‘finish’ learning Italian, or decide to unsubscribe (which is also FREE, unlike with some Italian banks, which try to charge you to close your account!)